The following is my random some-what delayed thoughts after attending Gnomedex 9 in Seattle. I attended on my own dime so these thoughts begin and end with little ole me. 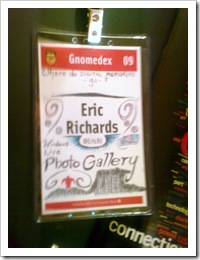 This is my second Gnomedex, the first being in 2006. Having missed the last two, I put Gnomedex 9 on my schedule as soon as possible so as to avoid missing it. Last year was bittersweet: as my Sweetie and I pulled our luggage behind us on the way to the Victoria Clipper for a wonderful getaway weekend, we passed by the Chris Pirillo signs to Gnomedex 8.

It was a great trip to Victoria (hi, Sweetie!) but I sure missed Gnomedex.

Gnomedex 9 was pretty different than 6. Blogging and "New Media" of course were big during Gnomdex 6 as was the emergence of Firefox and the burgeoning Mac laptop community. Since then, we've had three big things:

This year: no Blake Ross. No Crazy Uncles. The replacement? The social media crowd. The lovers of Facebook, Twitter, and the devices that let them Tweet and share and experience like crazy. In the end, I felt that the crowd - a very engaged, smart crowd - was more about leveraging technology than the creation of the technology. More on that at the end.

Some interesting answers from the crowd:

The presentations were all Mac laptop driven and the Macs demonstrated while they certainly aren't perfect (power and battery lifetime, odd Keynote playback issues) the users are willing to forgive them for being rascals.

Surface. Microsoft Surface was a *hit* with the audience. Who ever came up with the idea to bring Surface to the conference deserves a big bear hug. It was also a hit to ensure there was digital ink on the back of the conference card such that you could slap your registration card down on the table and have it pop up UI, like to bring up your digital business card which other people could drag to the sphere around their conference card and "add" to their contacts. Ba-rill-yant. People loved that, and they also loved the background flickr / Twitter #gnomedex feed that people could grab, examine, and then let flow back into the river of pictures and tweets. The pictures you could add to your card by dragging them over to your card's sphere, but not the tweets. You should be able to add the tweets - that would be sweet.

But anyway, for the Gnomedex crowd (given the usage of flickr and Twitter) it was the exact right social combination.

People enjoyed bringing up the different applications for Surface, too. It's as if Microsoft got an Apple-quality product out first, so it's quite the curiosity and something delightfully foreign to the attendees.

Now let's hope that they remember to log-in and get their contacts and pictures off of their card later. Because it's doubtful most will run into a Surface again anytime soon. (Hmm, just visited my card site. Okay, I have ideas on how to make this all a bit better.)

Microsoft Bing was there, and, well, didn't get as much love as Surface. On day one only ten people turned in their vote for the Bing contest / raffle. They should have held that raffle (darn it) because I was one of them! Ah, well. Chris had to stick it to the crowd several times to vote, probably saying something about the attendees, too, and their loyalty (heck, even our MSNBC guy, Jim Ray, during his presentation said something along the line of "I definitely recommend you use Google and not our stuff"). Probably if they had spent 10 minutes actually showing people the contenders live (oh, that might have taken a PC) then the attendees would have jumped in to vote.

Presentations. This year the presentations seemed like a mini-TED. Some science, some perspective, personal stories, and a general sense of high aspiration with some inspiration. So a mini-TEDâ€¦ with F-bombs. Maybe the real TED has F-bombs, I don't know, but I do hope this year's was the F-bomb peak for Gnomedex's lifetime. I have a couple of quick notes about the various presentations here:

There's also a CNN summary of the conference here: http://scitech.blogs.cnn.com/2009/08/24/gnomedex-puts-the-human-face-on-tech/ .

For me, the most touching was "My Cancer is Social" by Drew Olanoff (hey, I just received my yellow #BlameDrewsCancer shirt!). It was a tale with two takes on dealing with cancer: a private "I'm going to deal with this on my own" take, and a public "get everyone to blame their woes on my cancer" take. It also showed what is meant by leveraging social media in an open, real, short-term way. Entropy will ensue. What will the longterm impact be?

The talk which proved a twitter-backchannel stream can be brutal was Christine's "Life Extension for Geeks" talk. How can presenters get some sense of the mood of the room via social media while they are presenting? Will they need an assistant texting them real-time suggestions?

The twitter-backchannel stream was also a bit brutal for Firas Khatib's presentation on the protein folding game, http://fold.it/. Hey, I've known about those scary-ass prions for quite some time and this stuff is cool, so I was into it. But I'm an engineer geek, not a social media geek tech lover. A lot of tweets were "I don't get it" and Chris Pirillo, seeing the audience struggle, came to the rescue to help redirect the talk to the basics of, well, why one should care: "Because you'll help cure diseases." Ah. It probably would have been good to start there, even to scare the bejeezus out of people talking about prions a bit more.

The best pulling together past obscurities goes to Chris Brogan for the "Rise of the Trust Agents" talk. I say it that way because part of his talk demonstrated how attention is needed to build anysort of leverage in the social media world, and how quickly it can dissolve. I've, uh, given grief to the concept of attention before and how it was the Next Big Thing (a few years ago) but now it certainly makes sense: in a world constantly filling with a flow of bite size content, it takes something special to achieve the attention of an audience; those with that attention must built reputation and trust to keep it and to build on it.

Bre's MakerBot (1.0?) was cool -- I think when they make the designs mashable so that people can add their own logos to the stuff they make (plus make it come out smooth) then they'll really get interest going. I think Dave Winer made a comment back in 2006 about everyday folk being able to create their own stuff. Anyway, if I was a kid and I had a MakerBot and some 3D design software: I would be fabricating monsters All Day Long.

Conversations: the connections and conversations at Gnomedex is just as big as the presentations. Three parties to two days of presentations. I enjoyed chatting with Kathy Gil and learning about her UW class' twitter book coming out soon. http://twitter09.wordpress.com/ . I also had some endlessly fascinating conversations about health care policies and how best to manage the complex political and corporate forces swaying it (administration to administration, to boot). Then of course the techie stuff, Canon vs. Nikon (no contest), chatting with fellow 'softies, wishing I could hear better in noisy bars, learning about Austin (lots of former DC folks), hearing how iPhone development was like, and hearing lots of perspective from frequent Gnomedexers on how it has evolved over the years.

The conversation I brought up a few times had to deal with "where do digital memories go?" Specifically, we, our friends and people we respect are creating memories we'd one day would like to reflect on. Is it all just tears in rain, to quote one Roy Batty? If five years from now I want to think about the good times at the Gnomedex's I've been to, how successful am I going to be conjuring up the tweets, perhaps weighting the ones most often retweeted or linking to the same resultant URL? How will I pull the hash tags together into some related interesting thoughts auto-organized for me to enjoy and easily explore? People who were my friends then and who are my friends now: what did they share?

Spam = Success: twitter is a success. How do I know? The spammers are freaking all over it. As soon as the #gnomedex hash tag became a trending topic, the spammers and their tools went to work and we started seeing random tweets for grocery gift cards and movies. And "hi theres" from alluring young women who, yes, are probably some large dude in his parents basement.

Build the Future: The software developer quotient was lower than I expected, evidenced by Amazon recruiting struggle to award Code Ninjas for folks who could solve their code puzzles. I think they realized it's not an ideal recruiting venue (maybe that will change in the future). Ah, well, I got my little ninja dude; now I have to find an interesting place to take his pictureâ€¦ ooo, Mr. Ninja needs to go visit RedHook!

Looking forward, I'd like to see some of the tech creators some back and talk and engage with the Gnomedex crowd and have that public conversation. In order for the next round of technology to emerge, you need to see the current problems and pain points. And opportunities. As I wrote above, I see people creating a bunch of throw-away memories. Where goes your tweets? If five years from now you have a quiet moment to reminisce about this summer, would there be some set of memories jogged up to the surface if you had your tweet stream there, weighted by the re-tweets and hash-tags and shared tags and tweets with your friends and followers of the time? A lot of it might be throw-away and transient, but some not. Some might make you smile. Or cry. Like a good memory should.

That's my takeaway, as a developer, having attended this year's Gnomedex. There's a lot of content out there, and I want the lifestreams important to me to stay close, not only for today and tomorrow, but for all of my tomorrows.

<< Home
Eric Richards' place of techno (as in technology) happiness, rants, and corporate love. I work in Microsoft Office as a development lead.

Non-technical stuff going on with EricRi in the Northwest.

Disclaimer: The postings (and comments) here represent personal point of views and in no way represent the point of view or official opinions of my employer (Microsoft Corporation). The postings here are provided "AS IS" with no warranties, and confers no rights. And if you're reading this blog, you're not only incredibly discerning, you're also knee-weakening good looking.